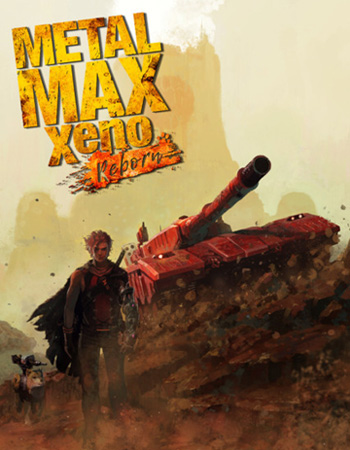 Humanity is on the brink of extinction and the last remaining survivors look to push back against the machines.

Half a century ago of war against the mother computer NOA has reduced even Asia’s largest metropolis, TOKIO, to rubble.

Explore this desolate wasteland and battle your way through onslaughts of enemies. Salvage, modify and hit back using tanks, weaponry and faithful battle dog, Pochi, to reclaim a future for the human race!

A Never-Ending Wasteland! – Set in a devastated world called Dystokio, Metal Max Xeno: Reborn is a nonlinear, open world, JRPG with real-time battle and vehicle combat elements. Take control of Talis and search for other survivors who wish to fight back against the machines of NOA. There are no limits to where you can go, no matter your progression in the game.

Unite to Survive – The fate of the universe is in your hands! Hunt down your enemies with the helping hand from loved characters and your beloved battle dog, Pochi. Pochi can also level up and learn new skills and will join up as a fourth member. Help him earn skill points by feeding him at the base.And yes, you can also pet him.

Hold Your Ground – Face NOA’s forces with a party of three or four! Smash and blast across the vast desert and beyond to unite with remaining survivors and rise against the crazed machines in explosive missions. Strike your enemies from inside your tank, or disembark and explore dangerous dungeons on foot with your allies.

Gear up for Victory! – Hone your skills to become more powerful than ever. Upgrade and learn skills of your choice from five general skill trees, which include “Drive,” “Repair,” “Medical,” “Militia,” and “Survive.” Light the Flame of the Hunter Spirit! Target your enemies using your tanks and weapons to unleash your powers to inflict massive damage.

Salvage and Build! – Scavenge new tanks and customize them with fresh paint and the strongest firepower you can find. The tanks can range in design and scope. Freely customize your tanks and vehicles, swap out engines, upgrade the weaponry and bump them with special equipment. Enjoy endless possibilities with combinations.

Notice: METAL MAX Xeno Reborn requires a controller in order to play. Playing with a keyboard and mouse isn’t supported