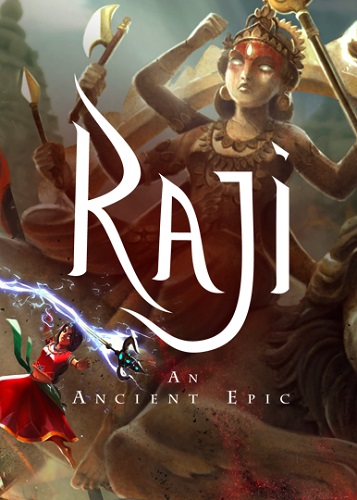 Story; A thousand years have passed since the last great war between the demons and the gods. Lulled into a false sense of security and having forgotten the ways of alchemy, humans find themselves at the mercy of the invading demons, who wage a new war to repay their past humiliation.

Cities fall, fortresses are in ruins and young children are abducted from their homes. In this chaos, a young girl named Raji is chosen by the gods to be the sole defender of the human race.

A Story of Siblings : Raji and her younger brother Golu are separated as the demonic hordes attack. It is now up to Raji to save him and put an end to this reckless war. On her quest she will have to overcome the full might and cunning of the great lord of demons, Mahabalasura.

Stunning Artwork : Drawing inspiration from legendary tales of Hindu folklore and the medieval architecture of Rajasthan, Raji: An Ancient Epic brings a visually stunning and unique style to the action-adventure genre! Enter an immersive environment drawn in the Pahari art style and brought to life with hand-painted textures rendered in 3D.

Tactical Combat : Diverse weapons and powers, gifted to Raji by the gods are at your disposal. Mastering them all will be vital to your success as the demonic hordes will skillfully adapt to each and every situation; while the Trishul may be perfect for one battle, the mighty Sharanga bow may be needed for the next.

A Universe Set in Ancient India : For the very first time, experience a game set in ancient India and infused with Hindu and Balinese mythology. From lore full of enchanting stories and fierce battles with demons and menacing bosses to ancient puzzles and massive forts and palaces begging to be explored – you will find yourself in a sibling story unlike any other.