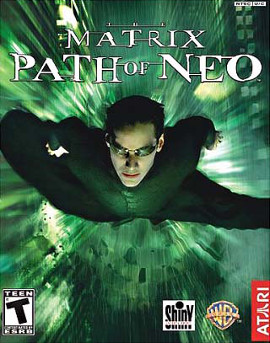 The Matrix: Path Of Neo will follow the story of the blockbuster motion picture trilogy The Matrix, The Matrix Reloaded and The Matrix Revolutions and for the first time allow gamers to play as Neo and become “the One”.

Gamers will play as Neo, but from the moment the game begins, how the situations play out, how they handle them, how they deal with the events, where they go, how people react to them — it’s all up to the gamer. They may win where Neo failed or find another way to solve the problem — the path is now theirs to follow.

As Neo, the choices the player makes to resolve each scenario and the resulting consequences may have a different result than the original films. Alternative scenarios filled with new characters, content and storylines have all been written and planned by the Wachowski Brothers to expand the Matrix universe and overall gaming experience.

Gamers will assume the role of Neo from when, as Thomas Anderson, he gets the cell phone in the package from Morpheus, to the flying street battle in the rain against Agent Smith.